Destination Angels Camp (DAC) was organized at the end of 2011 as a California non-profit, public-benefit corporation to promote economic development for Angels Camp in a public-private partnership with the City of Angels. In March 2012, the Angels Camp City Council unanimously approved a resolution to allow the City Administrator, City Planning Director and a City Council member to sit on the DAC board and executive committee. DAC IRS 501(c)(3) tax-exempt status.

DAC’s predecessor was the Brand Leadership Team (BLT) formed in 2008 by the Mayor to spearhead the destination branding and development program for the City. By 2010 it was obvious that much more was needed to increase jobs and bring new businesses into the area than by just focusing on tourism, although it is Angels Camp’s and Calaveras County’s leading non-governmental industry. The city council agreed and provided a budget of $7,000 to the BLT for the 2011-2012 fiscal year to help DAC get organized. 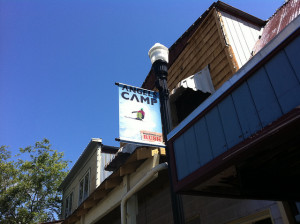 The BLT/DAC produced 36 pole banners,  set up and runs the free Wi-Fi hotspot in the historic downtown; installed two bike racks in the downtown area;  produced a 4-page ‘Starting a Business in Angels Camp’ booklet for the City and 50,000 copies of an area marketing brochure, ’49 Things To Do from Angels Camp,’ which features all the activities available within a 2 ½-hour drive of Angels Camp.

The Wi-Fi service in the historic district is available free to downtown businesses, residents and visitors and since August 2011 has served 704 distinct users, including 25 regular local users, 8 local businesses and hundreds who log in at the Visitors Center every month. In future it will be offered free to new businesses, saving them around $100 a month.

Destination Angels Camp has also been hard at work this year!